For reasons I can't quite fathom, the New Hampshire primaries aren't until September 14th. It makes it feel like the parties think the election is no big deal, but it is. On the other hand, I'm still not sure who I'm going to vote for for senate. None of the candidates is a great fit :(

In some ways I'm a predictable Conservative voter: I'm strongly pro-life, weakly pro-death penalty in that I approve of its limited use for multiple murder, I'd like a smaller government and a reduction of earmark projects, I'd like to see more employers of illegal immigrants viciously fined to discourage them...

But I'm also in favor of gay marriage & adoption (the latter of which jives perfectly with being prolife IMHO. If you want to keep babies from being aborted, they of course need good parents. I don't understand prolife people who are against this), and in favor of universal health care. I don't want to vote for someone who might make it so some of my coworkers lose the right to marry whomever they choose, and hey, making health care affordable would be great so I don't want to vote for someone against it either (but don't tell my folks, okay? I avoid the issue when they rally against the idea). These issues together aren't more important to me that the ones in the last paragraph, though, so I'm not about to vote for someone in favor of these but against the rest so I'm unlikely to vote for a democrat. I guess I'll be somewhat unhappy with whomever I do end up voting for.

When are true moderates going to run in either party?


"Everything you say, I am listening, I am all ears. But if you still believe I'm thinking of you, you're dreaming, yes you're dreaming" - The Shout Out Louds, You're Dreaming
Posted by Shannon at 12:33 PM 2 comments: Links to this post

I'm a little disappointed that I can't find out the answer to the latest burning question I have for my novel: If a person claimed to be something like a psychic who could find people, what sort of business license would they need in the state of New Hampshire? I found out that if this was VA they'd be classified as a Fortune Teller...

But does anyone really care what sort of business license Caitlin needs in order to charge for bringing people back from the dead? Readers probably wouldn't stop me at a book signing and demand to know what sort of business the IRS classified hers as, would they? Supposing this book is eventually published and does well, would even one person who read it really want to know this detail?

Then why do I get so hung up on the tiniest details like this?! I think my muse is confused. Not always, since I'm over 70,000 words into this project (which in paperback form is 250-280 pages) since November 1st, but often enough to be frustrating. Stop spinning your wheels on the inconsequential, muse!*


"If you won't save me, please don't waste my time" - Oasis, Falling Down
Posted by Shannon at 11:40 PM No comments: Links to this post

I've been doing the 50 Book Challenge every year since it started in 2003. At 23 books read for this year to date, I'm pretty far behind. Why? I read all four books in the Songs of Fire and Ice since January. Now I'm not sure I ought to have bothered. The rest of this post contains minor book spoilers.

I kept on, because...I thought the story would go somewhere. But somehow, four books and thousands of pages later, it hasn't. How can that possibly be?! I should have been wary, what with having heard whispers of what a tremendous asshole a lot of readers consider him (besides Neil Gainman, but I hate half of his books anyway, so why listen to him?) but I was lured in by the rumors that they're making A Game Of Thrones a TV show. So, I read on and on, with the vaguely disquieting sense that the various plots, subplots and sub-subplots should build to something...and I'm apparently an idiot, because even after four whole books, the supposed central theme ("Winter is coming" or maybe "we must band together to defend ourselves against the Others") is still as nebulous and misty as it was in book one. And people have been waiting four years for this to continue?!

I guess I could forgive the guy a severe case of writer's block, though he did say that he'd just be splitting a big book into two (this takes 5 years to do? The other book is supposed to have already been written) but his sins are worse just in the writing front. What's with his need to write the same details over and over and over again? Arya's prayer has been repeated - in full - no less than 47 times. It feel like he's under the impression that we've all suffered head trama so he's doing us a favor repeating things dozens of times, or else is convinced that he's being paid by the word. And those words are far too often in the passive voice. Didn't he take at least one writing class in college? Passive is bad, not something to stride for so your work sounds old-timey. Not to mention that despite the books being unreasonably bloated, there are so many things that are never touched on despite it being natural for readers to what to know about them. For example: when/how did Jon end up in Winterfell? Catelyn is supposed to despise him, so who raised him until he was old enough to ignore?

Other readers might gnash their teeth and wail in despair when they think of Martin's odds of living long enough to finish the other three books, but not me. I don't care if he ever writes another word. He's just not that compelling a writer. If he has better things to do than write, the hell with him.


"Never say that much to me, I guess it feels okay. Sometimes try and draw you out, sometimes but not today" - Faster Tiger, Unrequited
Posted by Shannon at 2:10 AM 1 comment: Links to this post

I hate every song by them I've ever heard...except one:
Andrew Bird
Athlete
Of Montreal
Belle and Sebastian
Fleet Foxes
Angels & Airwaves

"I hear your words, they call my name. I won't go back. You must be out of your head" - Birds Of Tokyo, Broken Bones
Posted by Shannon at 11:59 PM No comments: Links to this post

I feel like posting, but I don't have much to say. So I'll post a couple of pictures I've taken this year.


I think the look on his face is something we can all relate to now and then "oh no, now what do you want?" (and yes, he puts his paws like that all the time) 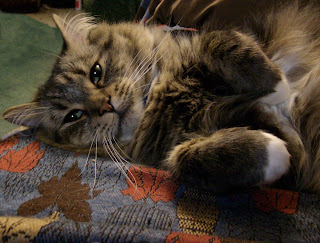 I like the clouds in this one. They're a strange shade of blue. My eyes are too, come to think of it - just not this color blue. I've tried taking pictures of them, and just about all you can make out is that they're an odd grayish blue-green, so I won't inflict a picture on you. 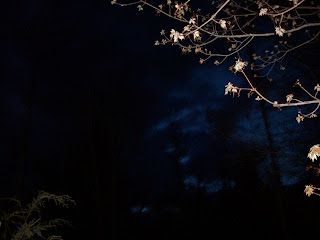 "You must be an illusion. Can I see through you?" - Minus the Bear, When We Escape
Posted by Shannon at 9:24 PM No comments: Links to this post

You know that old saying about the best laid 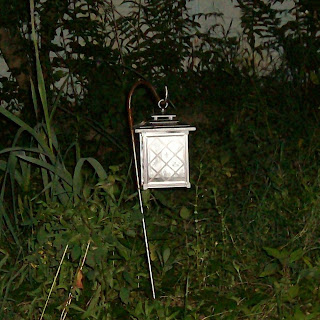 plans of mice and men? Clearly it also applies to amature photographers.

You see, last night I noticed one of these solar lanterns in the yard glowing eerily as its charge was draining down. It seemed like it'd make a good picture. Of course, I wanted a photo with the flash off so it would look spookier. What's scary about a lantern you can fully see? 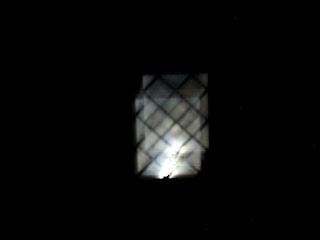 It didn't take too long before I realized that night photos take forever to expose, and it's really hard to stay still that long. That's why my first attempt looks like this. I suppose it ups the eeriness a bit, but it's definitely not what I was going for. 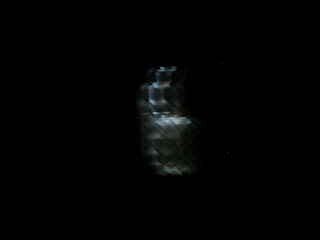 After a few more attempts that look almost identical, I had an ephiphany: the biggest problem was that I was foolishly breathing. So, to solve that problem, I just needed to hold the camera against me, so it wouldn't move when I breathed. Or maybe not. 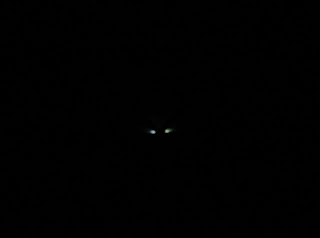 Then I thought, doesn't this camera have a couple of nighttime modes? Let's try those out. Well, if I'd been trying to take a picture that said "hey! look out, an angry demon is going to get us!" rather than "look at this neat lantern" this might have been a success. 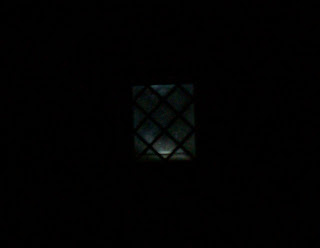 In the end, this is the best picture I took,and it's not very good because it took so long that the solar battery was more drained that would have been ideal.

In retrospect I might have done better if I hadn't been too lazy to get my tripod out of my car (I have no idea why it was in there) but what's the challenge in that? Maybe later this week I can give it another shot - with the tripod.

Oh well, let's chalk this one up to a learning experience.

"You flirt with disaster but never give in" - The Tender Box, Beautiful Sin

Posted by Shannon at 12:45 AM No comments: Links to this post

You know, I'd love to be able to make my own mashups, but thus far I haven't gotten anywhere when I've tried with various software. There are songs that would be cool to mix together just for the titles - like I could do a mashup of Bill Wither's "Ain't No Sunshine" and The Kill's "Sour Cherry" for "Sour Sunshine."


"I made an obstacle course out of me. When my laundry is through, I'll tumble with you." - USS, Neurochemical Warfare Gas Masquerade
Posted by Shannon at 9:24 AM No comments: Links to this post

Shannon
I thought I'd have things figured out by the time I was 34. I was so wrong...